You would think that if your body was constantly attacking itself, it would be pretty obvious and a simple doctor visit would be all it takes to uncover this nasty problem. Turns out it’s usually quite mysterious. I called what was happening to me “Zombie-ism.” I would have episodes of extreme fatigue, foggy brain, dry burning eyes, blurred vision, dry skin and hair and painful joints. These and other issues seemed unrelated until we discovered I have antibodies for Hashimoto’s, or hypothyroidism. What this means is that my body is eating at my thyroid as if it were a foreign body. It is an autoimmune disorder not unlike multiple sclerosis, type 1 diabetes, psoriasis, rheumatoid arthritis, Grave’s disease, and many others. I learned that if you have one autoimmune disorder, your weakened immune system makes you more likely to a host of many other sicknesses. So, not surprising that I also have Epstein Barr.

I have known that I have Hashimoto’s for about four months (though the symptoms have been there for a few years at least). Despite the clear episodes of Zombie-ism and declining ability to exercise, I still considered myself a very healthy person. I really wanted to believe that because I have stuff to do; I have ambition, I have ideas, I have things to make, I have people to love. Hashimoto’s is an inconvenience I really don’t want to have. But I also don’t want the inevitable medications and hormone replacement my doctor says I’m going to need. So I have a choice: deny it or embrace it?

I am participating in Jeffrey Davis’ (of Tracking Wonder) #daretoexcel challenge this month. I had all kinds of ideas of what kind of art and creativity related projects I might do. Then I had a harsh and immediate episode of Zombie-ism over the weekend that left me completely deflated, without creativity, energy and hope. I realized that I needed to take on Hashimoto’s above any creative project in order to ensure that I could take on many more creative projects in the future. To be completely honest, I’m not happy about this at all. I would rather focus my attention on other things. But as it so happens, my prerequisite to “other things” is my wellness. So be it. I will go with it. Head on, 100%. I want my wellness, dammit; I want it bad.

So my burning question is: How might I take this lifestyle change and do something others could also benefit from while cementing it as a new way of life for myself? How might I cure myself of Hashimoto’s (without meds) and make that cure available to others with autoimmune disorders so that they could know thriving once again? How would I do it so that it’s rigorous and complete, but not so daunting that it feels impossible? How could I make it accessible? How could I make it sustainable? How could I do it so that the choice to embrace it head-on feels less painful than denying it? I believe all of this is possible. I feel like it’s bigger than me and it’s going to be really hard. But I also think that it will be worth it – more than money could buy.

How will I do this? What project could I create with this endeavor? “Curing Zombie-ism” will be a book that helps people choose non-medicated wellness and relief from autoimmune disorders. 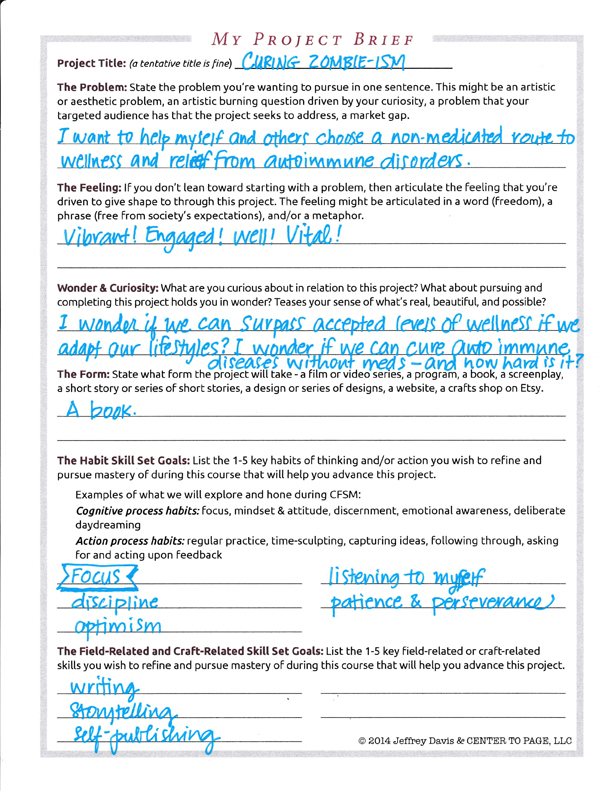 As Jeffrey reminds us, genius comes from the Greek idea that there is a force each of us uniquely has that helps us find our way in the world. As young people, that force is how we make our way and what we choose to do when we make our world. So the question is: what was I like when I was 8, 9, or 10 years old that factors into how I will tackle this project?

When I was 8, 9 or 10 years old, I stood on the front steps of our home with my older sister. She had issued a challenge: a race to the blue pole barn. After beating me, she told me that there was no limit to how fast I could move my legs. I believed her and set about in earnest to see if I could prove it. After a few more races I beat her. In my mind that was proof enough. What that experience did for me was to look at myself and my world differently – that limits were movable and even somewhat arbitrary.

The adjectives I would use to describe myself would be: pliable, curious (about what’s possible) and dedicated. Dare #3 is to take these qualities and bring them to my project. I will be testing what is possible (how will I push limits? how will I adapt myself to achieve unexpected expectations?). I will need to continue to show up to this challenge over and over again to move my perceived limits. I need these qualities to explore the limits of disease, adapt those limits and move beyond them to create a new condition for myself.

#DareToExcel is designed to get people to step up to do the things they already want to do, to be their better selves. The challenge is to have courage to be yourself, beyond what you’d imagined in day to day life. I love these dares; they’re very hard, but very fulfilling on many levels. But this isn’t the kind of dare I’m meant to take this time around.

This dare is the double dog dare for me: the dare you issue to someone who is entirely NOT motivated to take the dare. It’s the kind of dare meant to challenge your capacity to accomplish something you don’t want to do. It also raises the stakes; if I can manage to do this tough thing, others will take on the dare as well. “Curing Zombie-ism” is a double dog dare for me. I don’t really want to do it (I’d rather take on a number of creative projects), but I can’t not do this. We can’t not do this.