Late last year I started recording short art-making sessions. I was intrigued with the subtle sense of suspense in it; at least that’s how I feel when I watch other people make art. What are they going to do next? How are they going to make that work out?

What had started out as a personally satisfying activity became even more fun when people starting telling me that they enjoyed watching me make art because it is extremely relaxing.

And then in December, when participating in Tracking Wonder Quest 2015 I met Stan Stewart who was also questing. I was intrigued with his music and asked him if he would like to collaborate by adding his music to my art-making. What was a simple question quickly unfolded to an extremely fulfilling collaboration of mutual respect, inspiration and goodwill.

‘She Is Change’ is an especially meaningful collaboration for me because I was working on art that I was afraid to show anyone, so it was a big thing for me to even record it. It was art that felt deeply wonderful – but weird – and I didn’t want to risk showing it to people who might want to criticize it – at least not until I’d had a chance to explore it more and become more confident with it.

But when I shared it with Stan, he got it immediately. And he expressed his appreciation in such clarity I got confidence to go ahead and share. It was at that moment that I had a new criteria for myself: to record risk-taking and improvisation.

What’s more, not only did Stan ‘get it’ and appreciate it, he composed an amazing score tailored to the vibe of the art. He was able to express his understanding of it into music terms. He then played ALL of the instruments you hear in this piece, layering them on top of each other. Take a look/listen:

Stan and I have done a number of collaborations since we met. You can find them on my YouTube channel. You can also hear about new ones if you follow either of us on Twitter.

Through my collaboration with Stan, I have heightened appreciation for:

One of the reasons I love making art is that in order to reach that new thing, you have to give up control and just see where things take you. This gets exponentially more thrilling and precarious when collaborating with someone else. 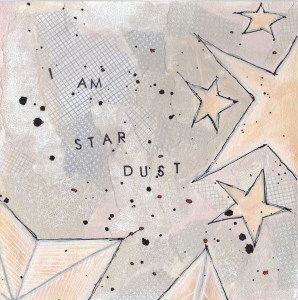 I’ve been collaborating with Amanda Judd for a few weeks now and am so inspired not only by the art and the direction we take, but by our relationship and the willingness we share for exploring. 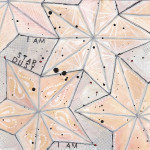 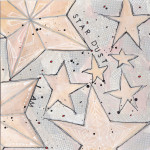 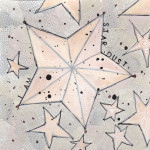 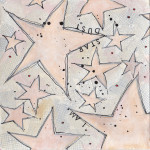 For this particular collaboration, we decided on a basic shape, a color strategy and a size. We gave ourselves a framework but left certain parts unanswered – to be interpreted by each of us as we launched into action. Keep in mind that we are not co-located; this is all done without being near each other. Liberties are taken as we independently try to merge our expressions together. 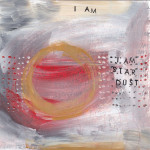 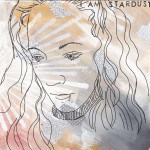 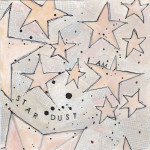 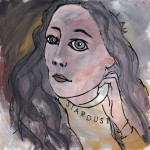 Her series were fantastically different from mine, giving us both a new opportunity to explore further within our shared constraints. I’m only showing my work in these examples and frankly, without hers, they don’t make as much sense. A testament, I think, to this new place we’re finding together.

We’re in the middle of this process and the lack of control is fascinating. What makes this lack of control thrilling and not anxiety producing is the relationship we have. I trust and admire Amanda. And we share the same philosophy that nothing is ever ‘wrong.’

I’m thrilled and grateful for this experience! If you want some sneak peaks day-to-day over the next few weeks, we’re sharing bits and pieces on Twitter and Instagram. And we’re planning to make something to share with you … soon enough. 🙂

My son, Max, made this picture of a tree last year in second grade. I have it hanging in the bedroom and I’m inspired by it every day. 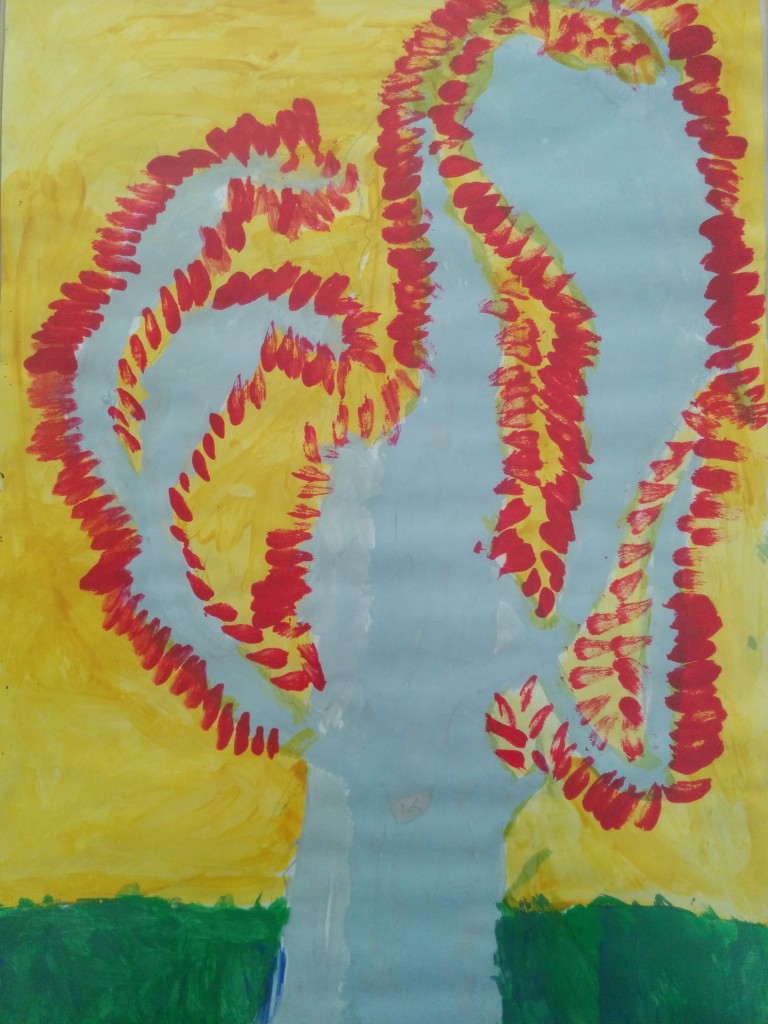 One morning this past week I skipped my morning meditation and started playing and experimenting in my art journal. I started with some humps, really paying attention to the juxtaposition of colors. 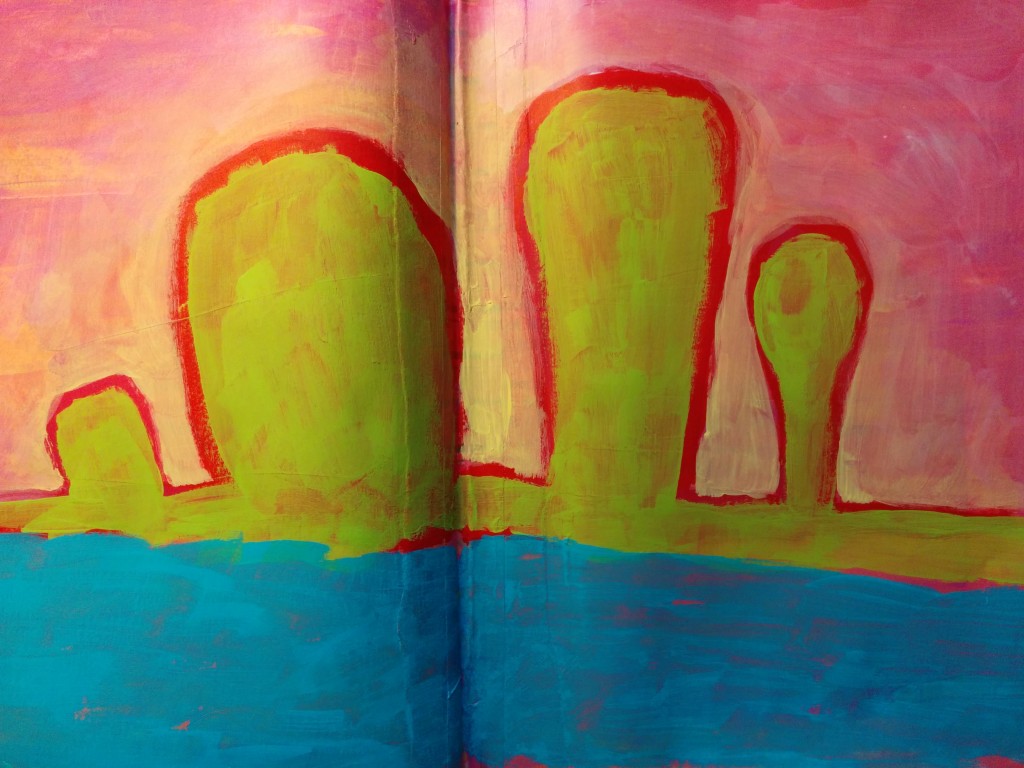 The humps weren’t enough, but it was time to get Max up for school, so I left them sitting there. When Max and I made our way back downstairs I said to him “I think they need thorns, like cactus … or leaves, like your tree.” 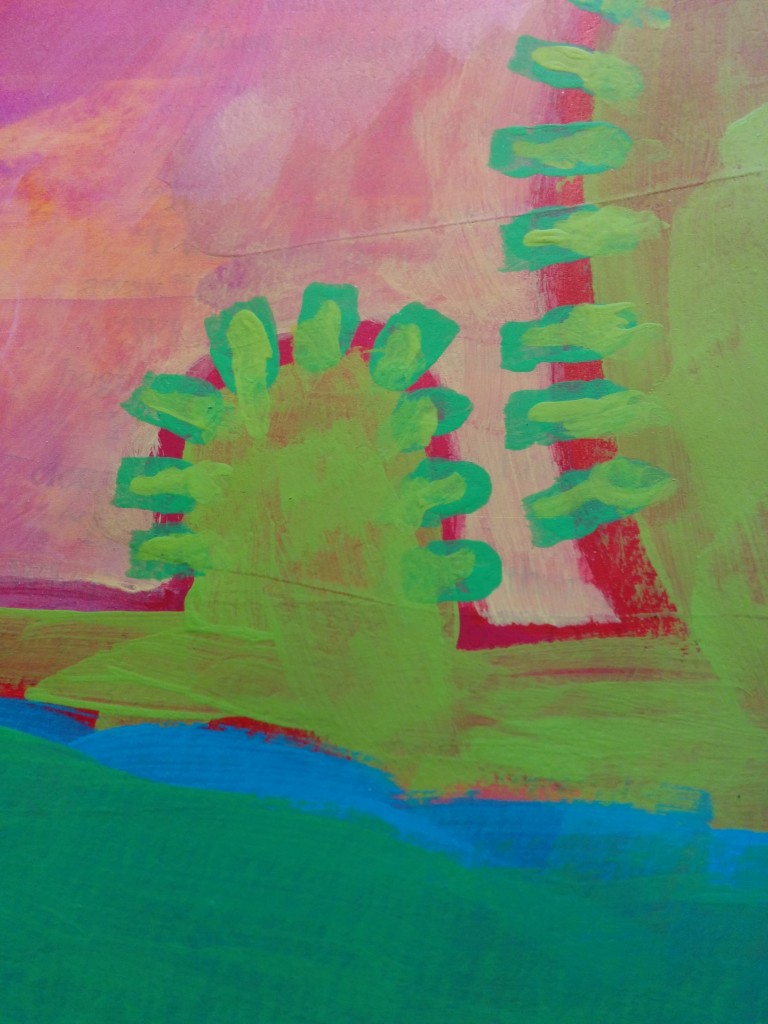 He consulted with me for a bit about how he used the paint brush to make his leaves and I played around with that. 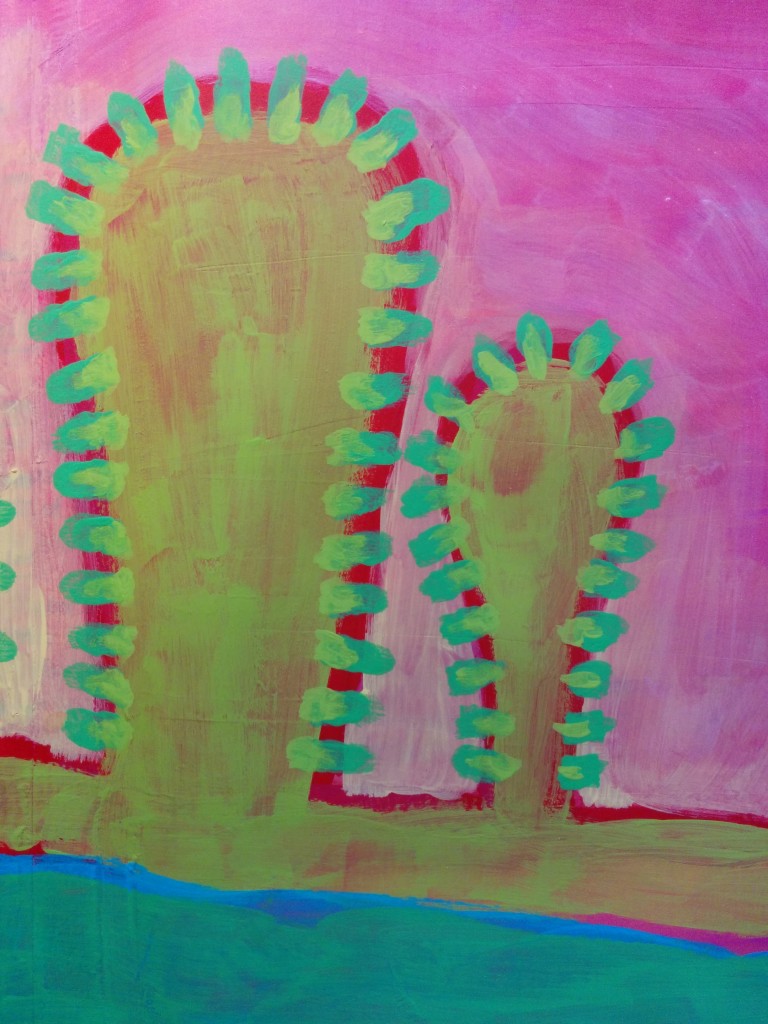 And then Max and I played Terraria together before it was time to head out to the bus stop. I’m so thankful in so many ways that I get to be a mom!

In my Ally Oop workshop yesterday and the day before, we were reflecting upon the ordinary things in our lives that we care about. For me, on this particular day, this was: my pillow, my son’s bug collection, my yoga mat, my bike and a candle that had been given to me by a friend, lit with the fire of Bridget of Kildare. 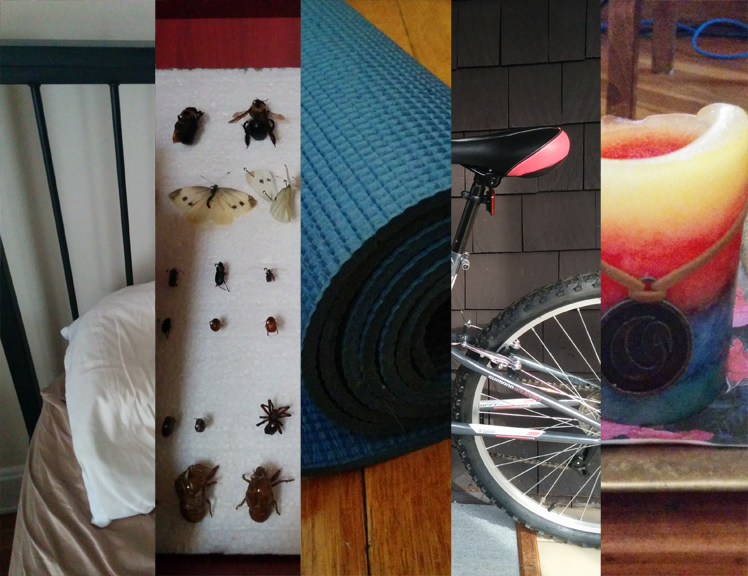 Take my yoga mat – I bought it cheap and it’s a tad too small for me (I’m tall). It’s got some scratches where the cat was participating. But it carries huge significance to me because of the yoga practice I am committed to and what it does for me. And my bike. Again, not fancy. But those two wheels are capable of bringing me on local adventure and freedom. And it reminds me of my childhood. 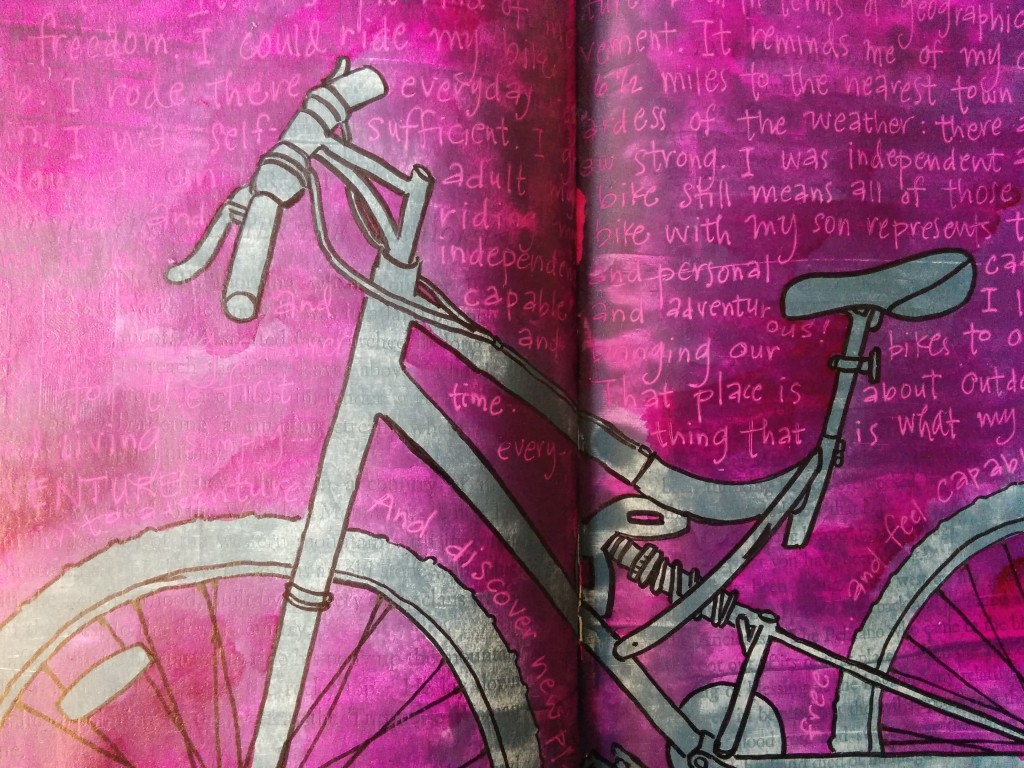 I don’t take these things for granted, but I notice there are other things I do take for granted. Like me, for instance. I’m a human like the 8 billion others walking this planet. I expend great effort to try to be special and have accomplishments so that I’m not ‘ordinary.’

But ordinary is not meaningless.

While this may seem like a cakewalk compared to the effort it takes to outperform others, it’s not fluff. It’s really hard. Being ordinary doesn’t mean being complacent or lacking meaningfulness. Being truly ordinary means accepting what is here now, with all of its imperfections and rocking it. 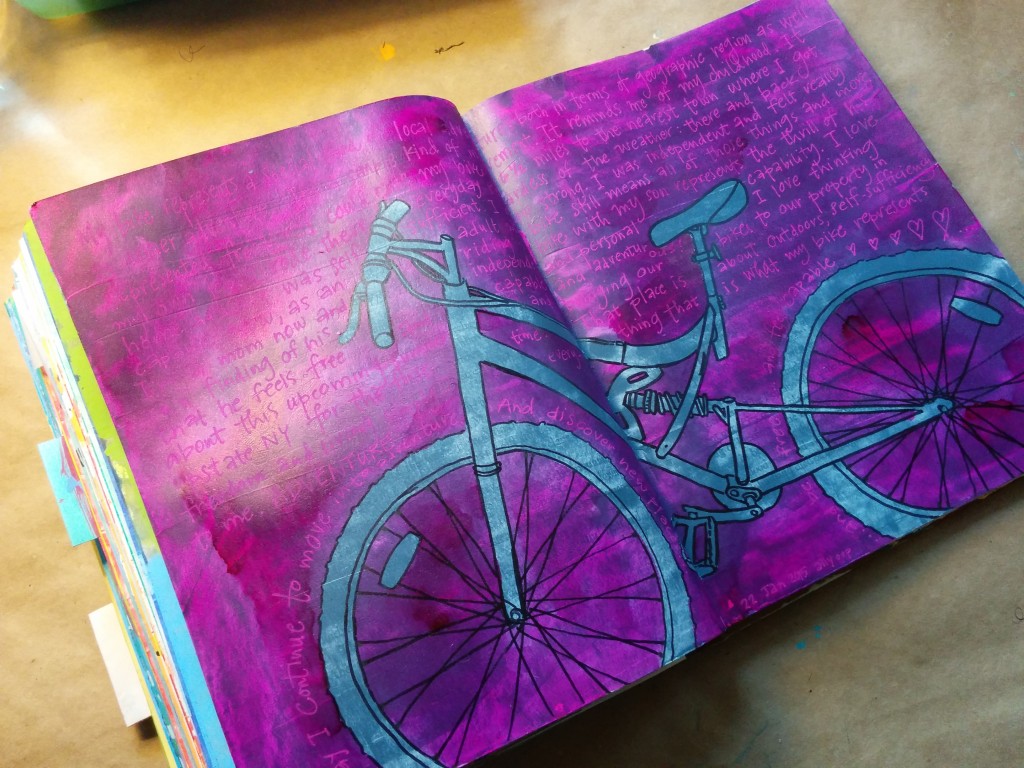 Day 8 of Ally Oop we’re exploring change. Yesterday we wrote about things that hold us back or ways we hold ourselves apart from our true self; today we cover that with an empowered rendering of ourselves (whether it be collage, sketch, colors, whatever). I have been on a little exploration of my own that has been going on for a few weeks, having to do with saturated color, unexpected use of color, and distorted and imperfect portraiture. So when it came time to use my writing from yesterday as a palimpsest, I knew I would be trying this style out again and listening for meaning.

Part of my captivation is in how it looks; part of it is this internal thing that’s going on when I make it. Today it was perhaps the most obvious to me as it has ever been: making this kind of portraiture feels like a basic, personal truth. 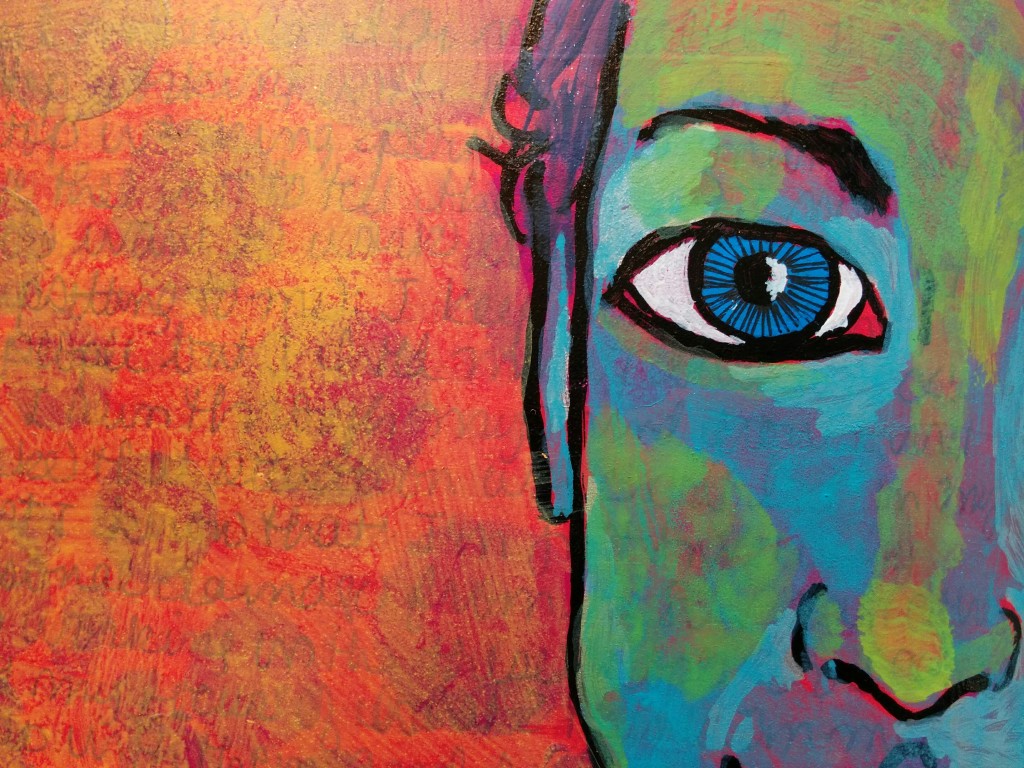 I worked on it throughout the day in bits and pieces, getting called over to it to add more. At one point, as I considered it there on my art table, my gut had this to say about it: “truth.” 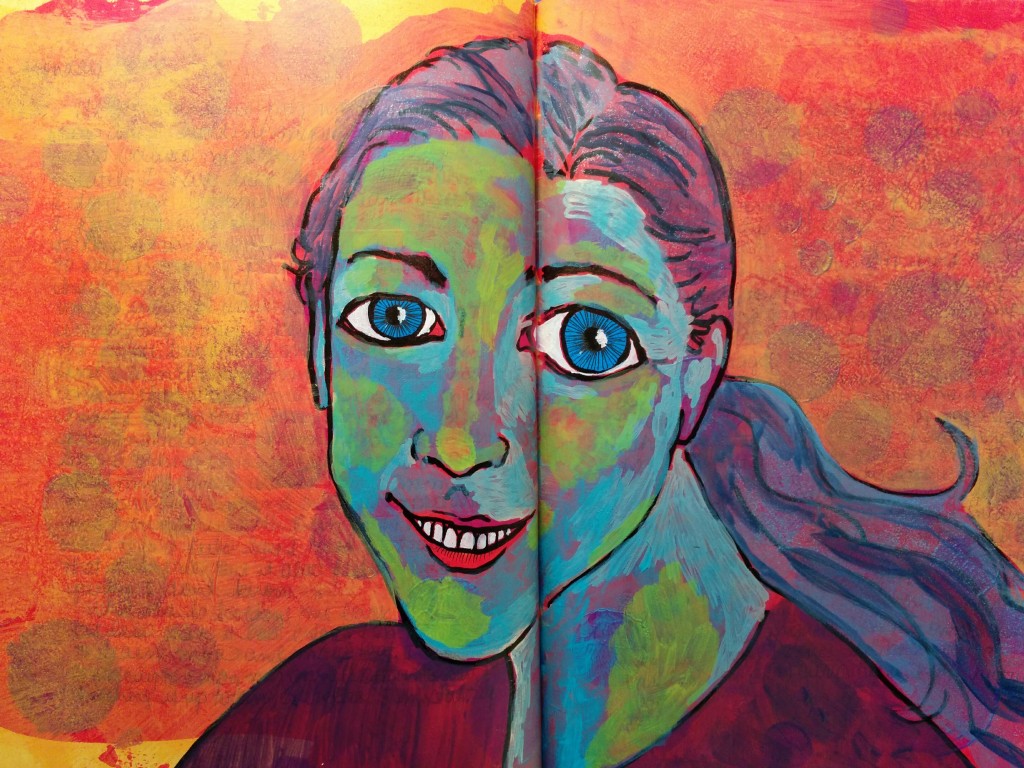 I wondered whether my gut was talking about working in that way or commentating about this being the depiction of my empowered self.

Last week, we ended the first Ally Oop week with a ‘play’ day in our journals. The playful challenge for the day was to doodle. 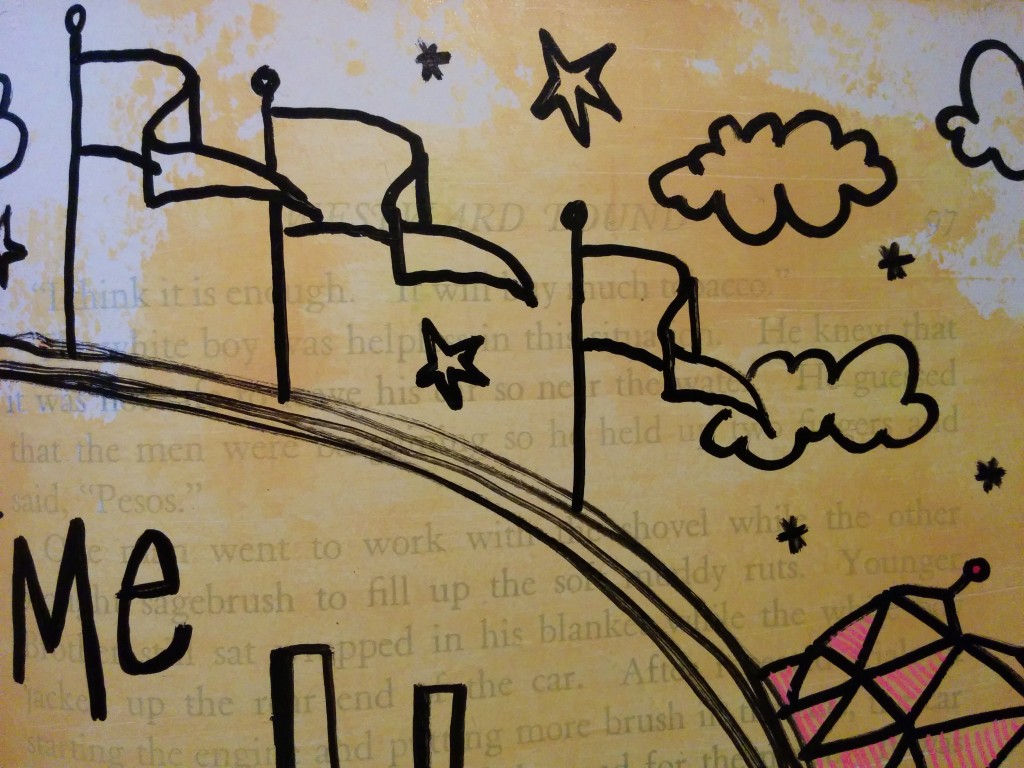 I love doodles not only for the very practical reasons (they help your brain work: recall, creative idea generation, and cognitive understanding), but because it’s an act of spontaneous experiment every time you put your pen on the paper! It is a pure act of improvising in a lightweight and risk-free way. And no one expects that it needs to be perfect. Ahhhhhhhh, the pleasure of strengthening your creative skillset! 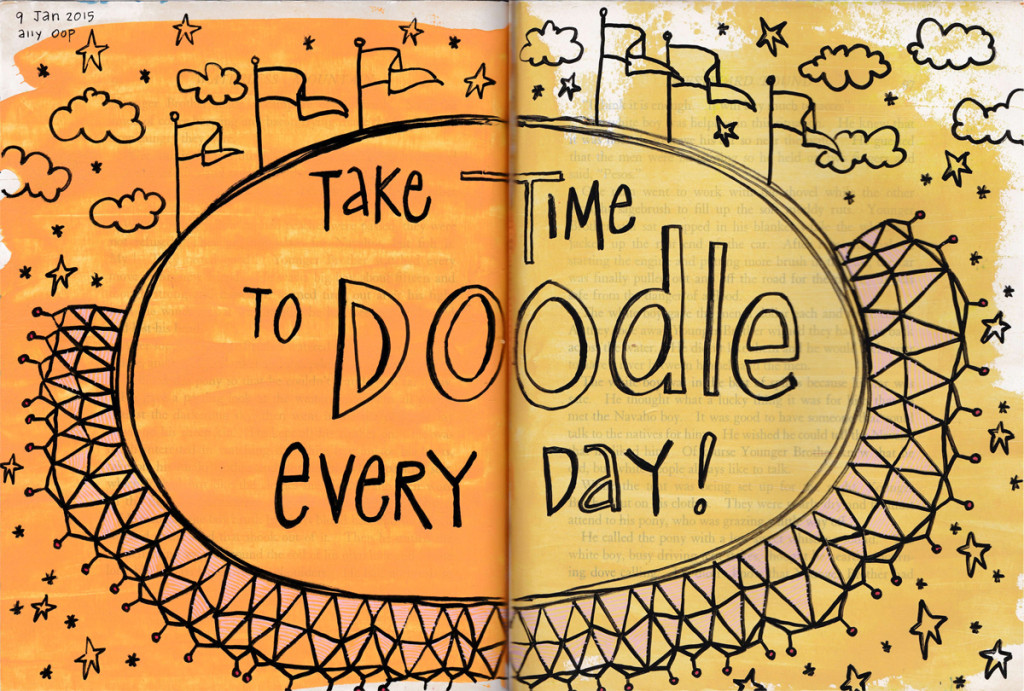 In my art journal yesterday, I contemplated qualities about myself that I normally get down on myself about, but which end up giving me great gifts. The contemplation is day two of my Ally Oop class that is going on right now.

I intended it to be a quick and light exercise, but my boldness created curiosities I couldn’t cut short. 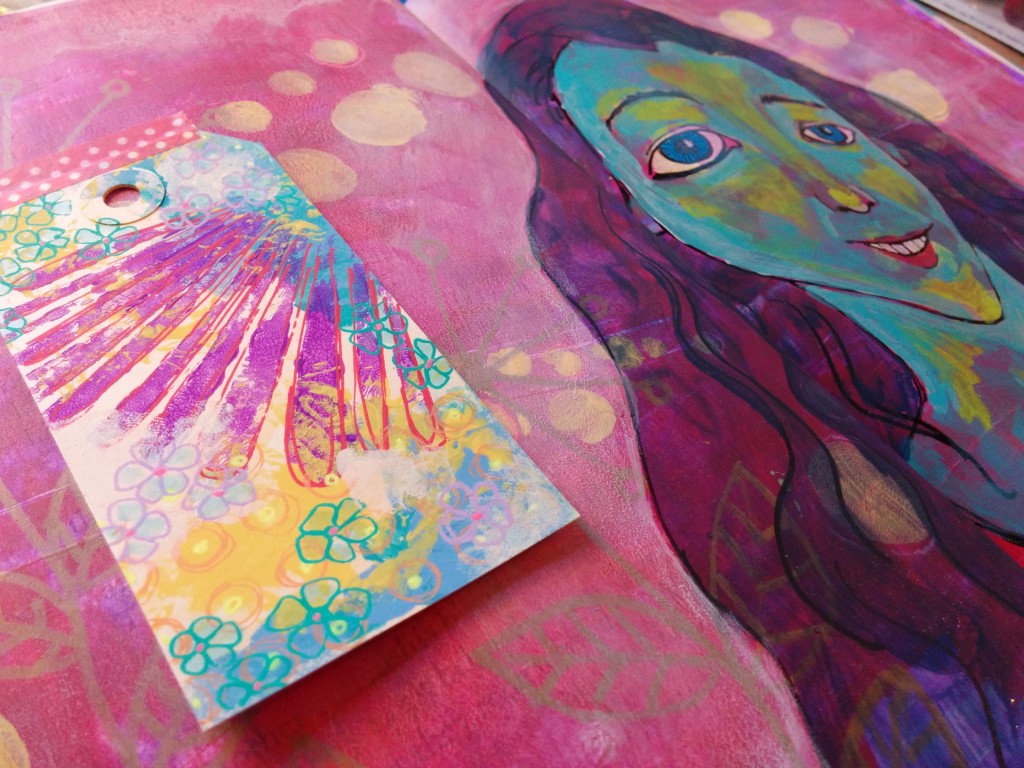 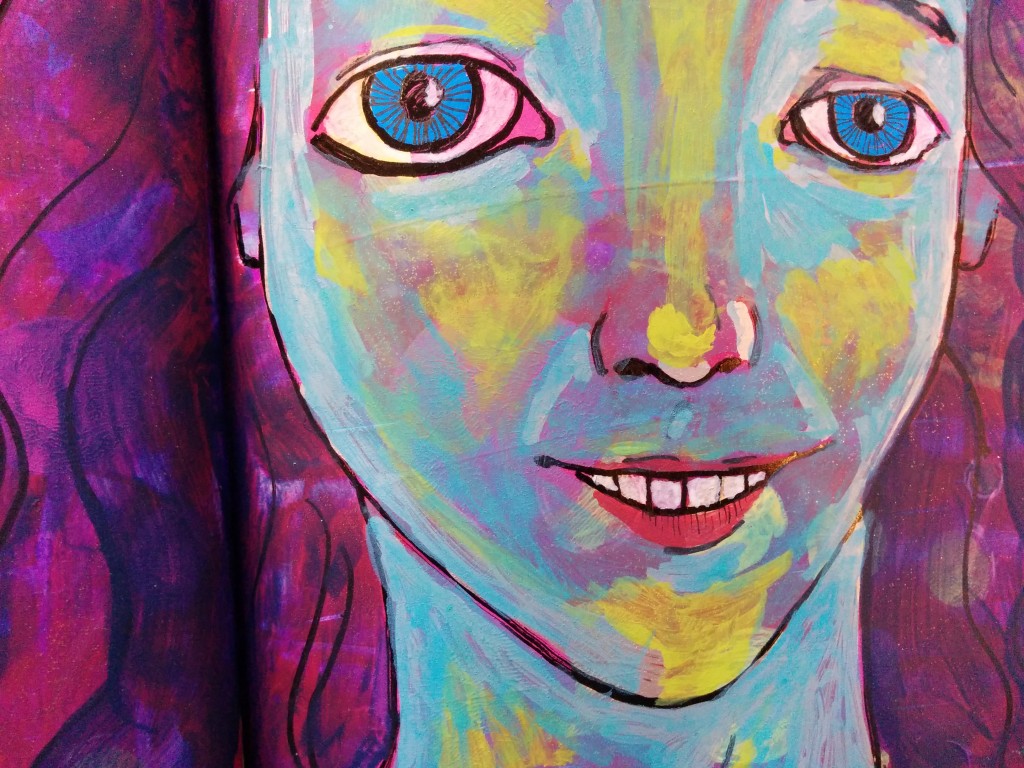 Fitting, then, to take these quirky qualities and explore them wholeheartedly on a day when I’m pondering my own quirky or seemingly unreasonable qualities.

When I finished, I had no choice but to admit to myself how much I adore the quirkiness of the art I had made.  There is a certain acceptance that goes on when acknowledging and accepting some uniquely variant quality. The acceptance remedies fear of what other people think. 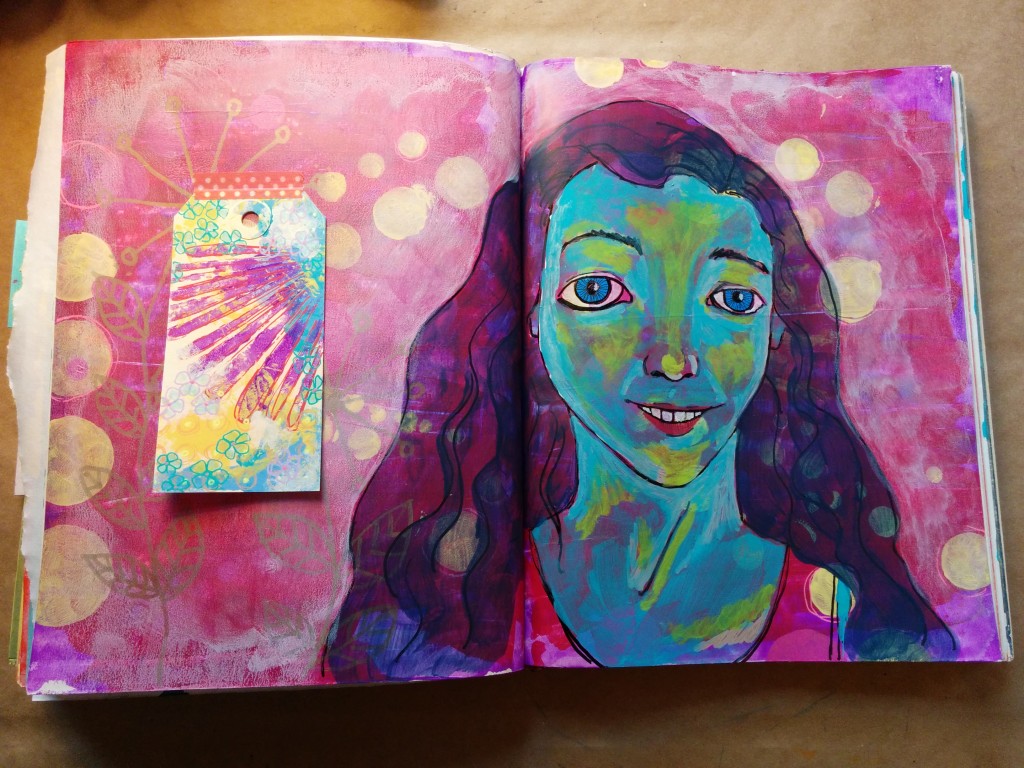 I used acrylic paint, black and gold oil-based marker and some ‘found’ stencils from around the house to create pattern. My journaling contemplation is written on the other side of the gift tag.